Why it Pays to Closely Track the Reasons for Well Downtime 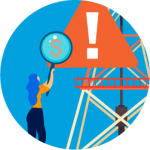 Detailed tracking of the reasons why a well is down for any period of time provides valuable, time-sensitive insight into the necessary remediation measures an operator should take to get the well back onto production. Over time, it can also provide operations personnel awareness around trends that may be occurring for a specific well or groups of similar wells or similar pieces of equipment.

It’s important to make the distinction between planned and unplanned downtime. The former can be necessary for many reasons, which we’ll touch on in this article. The latter can be minimized by paying close attention to well and equipment behavior, and specifically, considering these types of questions:

As mentioned, there are many reasons why a well may be down for planned reasons:

Understanding why your wells are down is critical. If unplanned, downtime leads to lower output and lower revenue, compounded by a lack of understanding around the triggers that cause a well to stop producing. Conversely, planned downtime can lead to higher performing wells that do better over time. In either scenario, it’s certainly a best practice for oil and gas producers to track their downtime reasons and associated hours as closely as possible.

P2 recently conducted a study of 20 companies, looking at the most recent three months of production across their wells, to identify the main causes of downtime and associated production deferment. The details of the study, as well as our findings and conclusions, follow.

Regarding categories of downtime codes being used by the field, here’s what we found:

A Look at the Results

The percentage of hours attributable to the "miscellaneous downtime codes" yielded some surprising results. Of the companies in the study:

As a further measure of the impact on production associated with uncategorized downtime, we calculated the average daily oil and gas production for the affected wells over the prior three months (when they were not down) to come up with an estimated BOE of deferred production. For one company operating 800 wells primarily in the Anadarko Basin, 86% of downtime was uncategorized and the associated deferred production was over 75,000 barrels of oil and 523,000 Mcf of gas for that three-month period. That’s large volumes of oil and gas with no ability to analyze and provide insight into the causes for the deferment beyond looking at hand-entered comments one by one.

How to Minimize Unplanned Downtime

Unplanned downtime can be minimized with increased rigor around the categorization of downtime codes to allow for analysis of the reasons. The downtime codes presented to the field need to be specific so you can define the problem quickly and easily and eliminate wasted time and effort. They should be split by planned and unplanned and include master categories with associated subcategories.

Due diligence is critical when it comes to the health of your assets and your business. Take the time to understand why unplanned downtime is occurring. Set up your codes appropriately to delineate problem(s) so that you can work with your field team to swiftly get wells back online.