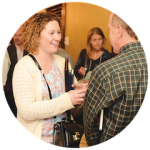 As user group leaders, Malach and Stevens will encourage fellow BOLO and Excalibur customers to attend future user groups, which provide a common meeting place for users to come together to discuss shared challenges and best practices.

“I need these events to help my internal customers,” Malach said, “because when they come up against a problem and they say, ‘What does everybody else do?’ I want to have an answer right away or know where to go to get the answer. That’s why these events are so helpful.”

A graduate of the University of Regina in Saskatchewan, Malach got her start in the oil and gas business in 1990, when she began working as a fixed-assets accountant at Canadian exploration company Wascana Energy. She spent seven years at Wascana, also working in the company’s IT and business-development departments.

Before joining the Bill Barrett team in 2011, Malach made pit stops at JD Edwards and P2. At P2 she was a consultant, development manager, product manager and director of product management. Her responsibilities at Bill Barrett include data management, business intelligence and product selection.

Stevens, a graduate of Metropolitan State University of Denver, arrived on the oil and gas scene in 1994 at Cody Energy, where she worked as an accountant. (Fun fact: Cody was the beta client for the GWiz software when it was first written. GWiz was renamed to BOLO years later and in 2007 BOLO merged with Wellpoint Systems, which P2 acquired in 2011).

After a 10-year stint at BOLO/Wellpoint and a two-year sojourn at EnerVest, Stevens came on board at Whiting in July 2013. As Whiting’s operational accounting manager, she is responsible for the accounting of all operational expenses and manages the accounts payable, accounts receivable, JIB and inventory management teams.

“The more contacts you have, especially in this industry, the better off you’re going to be,” Stevens said. “We’re constantly asking ourselves, ‘How do you think other companies are handling this?’ So having people you can reach out to for answers is priceless.”

Malach and Stevens do incredible work and we’re honored to have them lead Denver’s BOLO and Excalibur user groups.