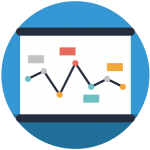 The statistics are sobering …

Room for improvement? You bet. Suffice it also to say that small improvements in these areas can yield big gains.

For example, for a 15,000-barrels-a-day producer, trimming unplanned downtime from 0.08 percent to 0.072 percent (a mere 10-percent reduction) would correlate to a $2 million-plus spike in annual revenues. Of course, were the price of oil to move past the $50-$60 range, that $2-million number would climb and climb fast.

So the question is, how – how can upstream producers reduce operating costs, increase production, and reduce risk, even during a time when operations are awash in disconnected data and engineers are being asked to do more with less?

It’s not an easy task, but it’s certainly not an impossible one, either …

When it comes to the upstream oil and gas business, data is everywhere. SCADA data, production accounting information, drilling and completions information, maintenance and reliability data, well header data, information from spreadsheets … you name it. Not only is there a ton of data, but it’s also disjointed in most cases because disparate systems are used to capture it. Knowing what information to look for and how best to use it, then, become instant challenges for production engineers and technicians.

Here’s where a single data environment and exception-based-surveillance processes come in. A single data environment brings together data from disparate sources and connects it to digital representations of the physical assets, giving production engineers and technicians a one-stop, self-service environment for configuring rules and performing key analysis. Exception-based-surveillance processes, meanwhile, provide a 24/7 watch over company assets and trigger alerts and tasks when predefined events occur, allowing personnel to manage more wells and remediate issues in less time.

So how could all of this translate to an Opex reduction? Let’s use tank offtakes as our example. Using the data in the single environment – field-data-capture actuals, historical well tests, wellhead pressure data, and production models – you could perform calculations and predict when offtakes would be absolutely necessary, limiting their occurrence. Fewer offtakes mean less spent on Opex and fewer run tickets.

It’s no secret that foreign materials – salt, scale, paraffin, and others – have a tendency to build up in produced water (PW) wells. It’s also no secret that this buildup occurs slowly over time and, if an acid treatment isn’t mobilized in due time, can hinder production.

In this scenario, you could use SCADA data, field-data-capture information, and an injection curve (PQ) to monitor the pressure-flow correlation against the curve over time. You could then create a rule that would provide prioritized notifications long before material buildup became a serious issue, giving you plenty of time to plan the intervention activities needed to keep production rates at their highest.

So how can you take a more proactive approach and prevent a lot of these failures from happening in the first place? Again, it all comes back to data and using that data to make prudent operational decisions. So you’ll want to leverage the information in the self-service environment to establish rules that would pinpoint any integrity issues, such as those related to the tree, wellhead, annulus, tubing, and valves. Prioritized notifications would then be provided, giving you the intelligence needed to quickly remediate the issue via preventative maintenance activities.

The One-Two-Three Punch For Better Operations

Reducing operating costs, increasing production, reducing risk. There’s not a single exploration and production company out there that doesn’t want to do these things, especially now.

And as we’ve seen, when data from across the enterprise is brought together and presented to the right people at the right time, these things can happen. As P2's Vice President of Production Operations Solutions, Grant Eggleton is responsible for overseeing the delivery of integrated solutions that streamline business processes and eliminate silos among teams. Grant has worked in the real-time production space ever since he graduated from Edith Cowan University, where he earned a degree in Computer Science. His work on well surveillance and data virtualization has been published by IChemE and in MMS Magazine. In his spare time, Grant enjoys playing golf, traveling, and deep-sea fishing. He’s also a certified open-water diver.

For Exec-Level Managers and IT Personnel, Communication Hurdles Abound When It Comes To Shift Logs, Shift Handover

08/15/2022
In previous blogs , we have examined the communication challenges for operators and supervisors around shift logs and shift handover...
#Blog #P2 Shift Log

04/28/2022
One of the biggest challenges facing oil and gas accounting and finance teams is the lack of centralized data –...
#Blog #Power of P2 #Oil and Gas Accounting
View All Related News